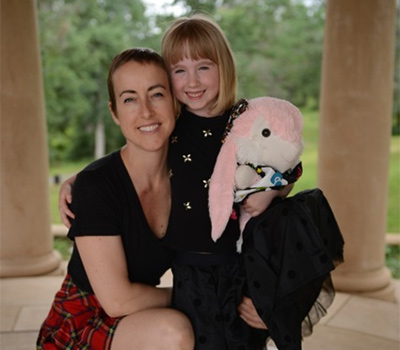 “My name is Sarah Wilson. I was 32 years old when I was diagnosed with Stage 1 Invasive Ductal Carcinoma on August 18th, 2015. I am currently 33 years old and still continuing my treatments through the end of 2016.

On September 2nd, 2015 I had my first lumpectomy and sentinel lymph node biopsy. They removed the lump and surrounding breast tissue, plus my first four lymph nodes. A few days later I was informed that my surgery was not 100% successful and they needed to take more of the breast tissue out to get “clear margins”. I was told that my cancer had spread to my first sentinel lymph node and that is why they removed the first four. So, on September 9th, 2015 I went into Court Street Surgery Center and had my second lumpectomy. I received the results a few days later that the surgeon got “clear margins”.

On October 15th, 2015 I went to Mercy hospital and had my port surgical put in place within my heart valves for my IV throughout chemo treatments. I started my first dose of the double/hard chemotherapy an hour after I was out of surgery from getting my port. The two chemo drugs that were put in me through my port were Doxorubicin a.k.a. Adriamycin and Cyclophosphamide a.k.a. Cytoxan. These drugs literally made me feel like I was dying, but it will take more than cancer and chemo to kill me!

I actually did very well throughout these chemo treatments every two weeks for eight weeks total. They ended just as I really thought I was going to die from chemo. On day seventeen my hair started falling out by the clumps, so my daughter and good friend shaved it bald for me. Eventually I lost my eyebrows and lashes as well, but that was a few months down the line. This was very hard on me and put the whole “cancer” look into reality in my mind.

On December 3rd, 2015 I started my first weekly treatment of my next chemo drug, Paclitaxel a.k.a. Taxol. I received twelve treatments once per week of this drug. This chemo was challenging at times, but nothing compared to what I have already been through. At the same time as starting the Taxol I also started a lower dose chemo called Herceptin. This drug was for the Her2 positive component of my cancer. I will be getting a full year of Herceptin treatments. On March 1st , 2016 I had my last Taxol treatment. I am still continuing my Herceptin treatments, however I only go to those every three weeks. Herceptin is very hard on the heart, so every few months I get a heart test called a MUGA…they mix my blood with similar drugs that react like chemo and they scan my heart to monitor it’s performance.

On March 28th, 2016 I started radiation treatments. These would last until May 12th, 2016…seven full weeks. Radiation did not hurt and was very short in time, but I had to go five days a week for the full seven weeks. It was very time consuming in that respect. After the third week I started to burn a bit under my arm and upper chest area. It was very manageable, but still painful at times. My nipple was swollen and hurt very bad the entire radiation time period. I used Aztec Clay to alleviate some of the burning effects and painful feelings, it worked very well! My radiation area took about five weeks to completely heal after I was finished with my seven weeks of treatment.

I hope to soon one day be named a survivor of cancer. This has so far been the hardest part of my life, but I am getting through it and surviving. It is all about positive thoughts and a healthy and positive lifestyle in order to beat cancer. I tell people that I am not suppose to have cancer and that this is all a dream. I have NO family history of ANY cancer, I have always been very athletic, eaten extremely healthy, and NEVER smoked anything or consumed alcohol more than a few times in my life. Cancer does not discriminate; it will attack everything and anything. Two big tips I have for survivors and those that do not have cancer especially, stress is BAD and sugar is worse! Those two things feed disease like crazy.

Throughout my cancer journey this far I am pleased and proud to say that I was able to care for my daughter as a single parent, walk her to and from school (never missing one day no matter how bad or fatigued I felt), keeping my nutrition going strong, keeping active as much as I could, driving myself to most of the treatments, and calling for help from friends and family when I knew I needed it. I had a great support system! A lot of emotions run deep and run hard within a person when they are diagnosed with cancer and have to go through chemotherapy. Depression and anxiety are huge side effects of this journey. But it truly is mind over matter. You can beat it and you can survive!”