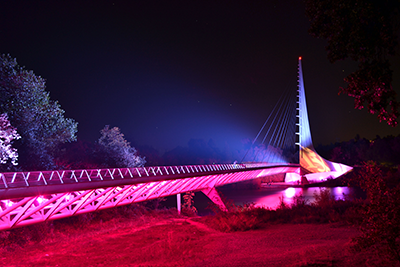 A Pink Sundial by Jen Womack

The 2022 Lighting Of The Sundial Bridge

Come see the Sundial Bridge awash with a pink glow to support breast cancer awareness and education. The bridge will be lit the entire evening of October 20-23rd, 2022.

About The Sundial Bridge 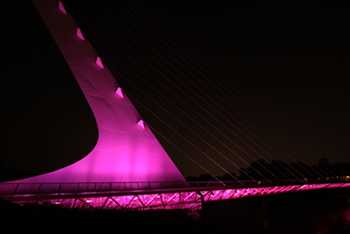 World renowned Spanish architect and engineer Santiago Calatrava conceived the Sundial Bridge’s unusual design, his first free-standing bridge in the United States. Calatrava has built bridges, airports, rail terminals, stadiums, and other structures around the world. His notable designs include the new PATH transportation terminal at the World Trade Center site in New York City and several projects at the 2004 Olympic Games in Athens, Greece, including the main stadium where opening and closing ceremonies were held.